Even though Habitat for Humanity International was officially founded in 1976, the origins of the group can be traced back to 1942, with the founding of Koinonia Farm in the small Georgia town of Americus.

Founded by Clarence Jordan, a biblical scholar, Koinonia Farm was based on the concepts of community, racial equality, and Christian beliefs. Residents of the Americus, Georgia farm shared resources, enjoy equality, and utilize natural resources wisely. The multiracial community was quite controversial yet managed to survive even in the pre-Civil Rights Act south.

This concept of partnership housing developed at Koinonia Farm became the basis for the Fund for Humanity. This fund evolved into the organization now known as Habitat for Humanity. The faith-based organization has achieved many major milestones throughout its history.

1965: The Fullers Arrive at Koinonia

In 1965, Millard and Linda Fuller left the affluence of their lives in Montgomery, Alabama and made their way to Koinonia in search of a way to dedicate their lives to Christian values and service. Together, the Fullers and Jordan came up with the notion of "partnership housing". This concept involved having those in need of a place to live work alongside volunteer workers to build affordable homes.

Three years after the Fullers arrived at Koinonia, The Fund for Humanity came into being. The idea was for volunteers to partner with people in need of housing to build homes without seeking profit. The new homeowners would pay for their homes via interest-free loans, with money taken in from payments and donor contributions being used to build additional homes following the same model.

1969: The First Fund for Humanity Home

A year after The Fund for Humanity was founded, the first home was built in Georgia. Additional properties followed in the United States.

In 1973, the Fullers temporarily relocated to Africa, where plans were put into place to implement a housing ministry for needy families in what was then Zaire (now known as the Democratic Republic of Congo).

After spending three years establishing a housing program in Zaire, the Fullers returned to Americus, Georgia in 1976. This is when Habitat for Humanity International was established. Millard Fuller is credited with founding the organization, and he served as its leader for 29 years.

1981: Achievements in the First Five Years

By 1981 a total of 342 Habitat homes had been completed around the world, and the organization had grown to seven overseas affiliates and 14 within the United States.

1984: Presidential Attention From the Carters

In 1984, Jimmy and Rosalynn Carter decided to become personally involved with Habitat for Humanity. Their affiliation with the organization brought worldwide attention to its work and helped fuel exponential growth. Their involvement continues to this day.

Habitat opened its first ReStore thrift store in 1991. Located in Winnipeg, Canada, this thrift store ushered in a new era of fundraising for the organization.

A year after the Winnipeg ReStore opened, Habitat expanded this aspect of its operation into the U.S. by opening a store in Austin, Texas. 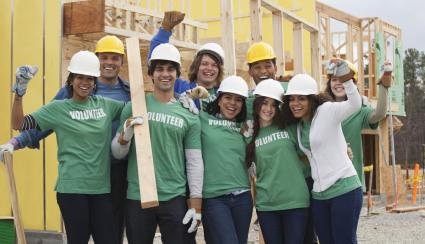 In 1996, Millard Fuller's work with Habitat for Humanity was recognized with the highest honor bestowed on a civilian by the U.S. government. He received the Presidential Medal of Freedom, awarded by then-president Bill Clinton.

In the first year of the 21st century, Habitat for Humanity completed home number 100,000. This milestone property is located in New York City.

Habitat for Humanity introduced Operation Home Delivery in the wake of Hurricane Katrina to help New Orleans and Gulf Coast residents displaced by the powerful storm. The project focused on coordinating with local organizations to quickly repair and construct residences to help hurricane victims gain shelter and start the long process of rebuilding their lives.

Millard Fuller passed away in 2009. He was 74 years old at the time of his death. His life and work were recognized and honored by many leaders and organizations, including presidents Carter and Clinton. Both houses of Congress passed resolutions in honor of his achievements and contributions.

In 2013, the organization reached the milestone of having built or repaired more than 800,000 homes. Additionally, the organization served 100,000 families in the 12 months of 2013, an all-time single year high for Habitat for Humanity.

Habitat for Humanity continues to have significant impact worldwide.

As long as there are people in need of decent, affordable housing, there will be a need for this important nonprofit organization and the history of Habitat for Humanity will continue to evolve. You can get involved by donating and/or volunteering. Habitat for Humanity, in partnership with the efforts of countless volunteers and donors, has provided affordable shelter and hope for disadvantaged families throughout the world for decades and will continue to do so long into the future.