Volunteering has many benefits for the volunteer, including a sense of personal satisfaction, helping a cause that's meaningful to you, and developing valuable skills to help your career. However, volunteering does more than just provide an outlet for the volunteer's passion. Volunteerism is crucial to the success of many nonprofit organizations and charities, and many would not be able to function without them.

Organizations need volunteers for many essential programs and services. For example, almost every office needs someone to answer the phone, file papers, type and keep things organized. These duties often fall upon volunteers. Other recurring volunteer duties vary by organization, but common examples include:

One of the key measures of a charity's performance is the percent of the money raised actually goes to support the needs of the charity. If there weren't volunteers on staff, more of the money collected by a charity would be to pay its staff rather than support the charity's efforts. In 2019, Americans volunteered approximately eight billion hours valued at an average rate of $25.43 per hour. This means that organizations that rely on volunteerism are saving around $203.4 billion on wages, which leaves more funding available to provide for the organization's targeted needy populations.

Most nonprofit and charitable organizations are governed by a board of directors, most of whom are volunteers. The board provides a crucial role in setting the vision, mission and policies of the organization. They also are usually instrumental in fundraising, and developing community contacts. The importance of a strong volunteer board of directors cannot be overstated, especially for smaller nonprofits that struggle to make connections to wealthier individuals and companies in their communities. In fact, at least 45% of nonprofits require board members to do fundraising as part of their board duties.

Volunteers Are Part of Nonprofit Organizations

In many cases, nonprofit organizations are entirely run by volunteers without any paid staff. These charities provide many valuable services in the community, whether it's rescuing animals in need, feeding the homeless or providing educational services to adults and children in need. Without volunteers, these organizations would simply not exist.

Volunteers in Your Local Community

Volunteering in the U.S. is on the rise and it's thanks to the increase in Americans willing to spend time supporting their communities that populations in need don't "fall through the cracks" because local and federal government services cannot assist them. In 2018 alone, 77.34 million adults volunteered for at least one organization, and research has found volunteers tend to be involved with their communities more frequently than people who do not volunteer. This includes caring for neighbors, voting and showing more civic pride and caring for their local communities. 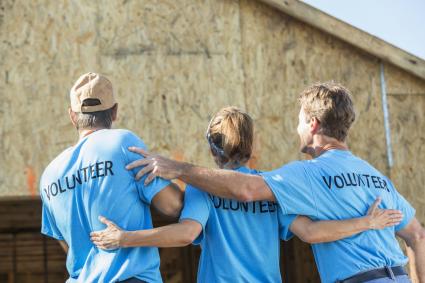 Millions of nonprofits have special events each year, which are a critical part of their fundraising plans. This includes animal shelters, environmental organizations, foundations for medical research, schools, libraries and even "friends of" groups for parks and historic sites. The events can include:

All of these events require dozens, or even hundreds, of volunteers to make them run smoothly. This includes volunteers on the days of the events and in the months leading up to them. Without the volunteers, less money would go from their fundraising efforts directly to the charity's goals. Instead, more money would be paid in budget costs to staff the events. Volunteers do more than work at events, they also are more likely to be a donor as well, and 50% of volunteers in one study stated that volunteering led them to make larger donations than they previously would have considered.

Nonprofit organizations, especially newer or smaller ones, rely on volunteers to get the word out about them. It's basically like the telephone chains of old. One person tells 10 of her closest friends. These 10 each tell another 10, and so on. When more people know about an organization, these people can be asked to:

If organizations had to pay all the people who assisted them in this capacity, the cost would be astronomical and the majority of those projects would be bankrupt. Volunteers can make a big impact on the health of an organization and help the community know that it exists. Research in one study found that 42% of volunteers became one because they encountered the organization and were asked to volunteer, which would not have happened without other volunteers spreading the word.

One great way to promote volunteerism to others is just to lead by example. Whether it's for church, an animal shelter or another group, volunteering seems to be contagious and provides benefits not just to organizations, but also to the volunteers.