In the past, an email was circulated that asked individuals to collect large numbers of bottle caps that would be redeemed for one chemotherapy treatment for a patient in need. When this chain message caught on, especially in the regions of Virginia and West Virginia, large corporations like Walmart got involved in the bottle cap raising efforts. After digging deeper, it became apparent the entire cap drive was a hoax.

The scheme became so widespread, the American Cancer Society issued a statement. If you are ever asked to collect bottle caps for charity, be on guard - most charities do not do anything with bottle caps.

Not many nonprofits collect bottle caps. The value of plastic is so low that many charities have found collecting caps to not be worth the effort. However, there are a couple that will accept donated bottle caps.

Envision is a charitable organization that collects bottle caps and uses them to make benches for schools, parks, churches, and community centers. They are also used to make equipment for schools, bricks for community garden centers, and tables for playgrounds and schools. Bottle caps can be dropped off at several locations, however they may not accept them during times of crisis like the COVID-19 pandemic, so check with them first.

Because of the decreased value of plastic caps, many charities have repositioned their efforts to other types of donations, including caps made of different materials. Whether they collect their packaging for recycling or make donations based on items sold, these efforts make a difference in the world. 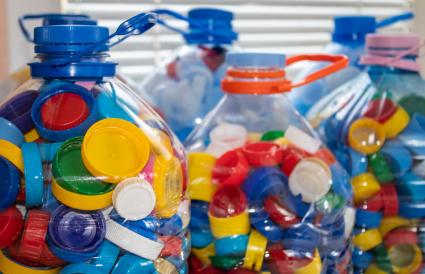 Since most people don't recycle bottle caps, they tend to end up in oceans where birds and marine life regularly mistake caps for food. Recycle your caps at select Whole Foods stores, or use their mail in option to keep them out of landfills. Keep in mind that they do request that you allow your box of recyclables to sit for seven days prior to mailing in due to COVID-19.

The Aveda Full Circle Recycling Program helps keep their packaging out of landfills by collecting it. Bring your Aveda packaging and accessories to Aveda Centers throughout the United States. Aveda takes products not accepted by city recycling programs. They use this plastic and the materials in making new packaging or accessories. The company accepts everything from jars, tubes, pumps, brushes and more.

If you are crafty, you can take beer caps, or any other metal bottle cap, and turn them into jewelry, coasters, decorative magnets, and anything else you can dream up. If you opt to sell your bottle cap crafts, you can later donate the money. In this way, you are able to make a difference with something as simple as bottle caps.

What Can I Do With Extra Bottle Caps?

Extra bottle caps can be recycled, sold, donated, or used to make a craft. Any money you make can then be donated to the charity of your choice.

Can You Get Money for Plastic Bottle Caps?

If you have a lot of bottle caps, you can consider selling them on Etsy or eBay. While you can't make a ton of money, for an assortment of around 400 caps, you can make about $10.

Where Can I Recycle Bottle Caps?

If your local recycling facility accepts bottle caps, you can turn them in there. If not, you can send them to TerraCycle.

Do Good With Bottle Caps for Charity

If you would like to use your bottle caps to help a charity, there are plenty of options to choose from. Brainstorm to come up with an effective list of ways to utilize your time, talent, and resources to benefit others.